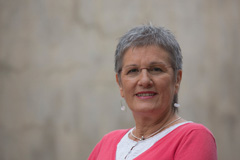 New member of the Foundation's Board of Trustees.

Milagros Pérez Oliva will bring her media experience to bear on the study and promotion of bioethics.

She has been with Spain's leading daily newspaper, El País, since 1982, where she has been senior editor of the paper's Catalonia and Opinion sections, and was reader's editor from 2009 to 2012. She currently writes articles and editorial columns. She is also an interviewer on Terrícoles, produced by Barcelona TV channel Betevé, and appears as a political analyst on a number of programmes, including Hora 25 on Cadena Ser, els Matins on TV3, El Matí on Catalunya Radio, and Vespres on Spanish national broadcaster TVE2.

She was a member of the Bioethics Committee of Catalonia for eight years, and is currently on the Public Health Advisory Board, and is a member of the board of Pompeu Fabra University. She has won a number of awards, including the Government of Catalonia's National Culture Prize for Journalism, the Grifols Prize for Bioethics, and Barcelona City Council's Social Well-being Award. She also received the Josep Trueta Medal for contributions to health, from the Government of Catalonia.