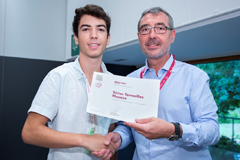 Víctor Torrecillas and David Belda are the winners of the awards given by the Victor Grifols i Lucas Foundation and Catalunya la Pedrera Foundation.

Senior high school students Víctor Torrecillas and David Belda are the winners of the BIYSC Awards 2017, a prize given by the Victor Grifols i Lucas Foundation and Fundación Catalunya la Pedrera to recognize research projects presented at the Barcelona International Youth Science Challenge (BIYSC) 2017. This international programme is designed to promote interest in science and educational excellence among young people aged from 16 to 18, across the world. The winners received a grant to enable them to participate in the London International Youth Science Forum (LIYSF), a scientific event for students from different countries, to be held in London this summer.

Víctor Torrecillas is in his second year of the baccalaureate at Centre d'Estudis Montseny-Poblenou, Barcelona. Torrecillas' entry for BIYSC 2017 was an essay titled "Mutating LAE5 through bioinformatics tools to obtain a source for high-yield geraniol production". David Belda studies at Kings College, Alicante, and submitted a project on biomedicine and ethics with the title "Is animal immunostaining efficient and ethical?"