“Although the debate around CRISPR has to be rooted in the scientific community, society as a whole must also participate” 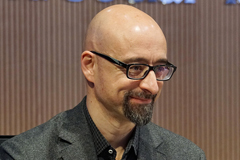 "Although the debate around CRISPR has to be rooted in the scientific community, society as a whole must also participate"

He delivered the Josep Egozcue lecture on advances in CRISPR, a subject on which the Foundation recently published a monograph.

"Although the debate around CRISPR has to be rooted in the scientific community, society as a whole must also participate"

Salvador Macip is a research doctor and senior lecturer in the Department of Molecular and Cellular Biology at the University of Leicester. In May 2017 he delivered the Josep Egozcue lecture on advances in CRISPR, a subject on which the Foundation recently published a monograph. And on 20 December he gave the keynote address at the Ethics and Science Awards Ceremony, with the title: "Playing at being God: the ethical and social challenges of 21st century medicine."

What applications does CRISPR currently have in humans?

The CRISPR technique is a method for editing genetic material in a huge variety of ways. Although there is still a lot of work to be done before this goal can be achieved, its potential applications are clear. Research is currently focusing on editing animal cells. In humans, research is more complicated as – in addition to the technical challenges – such work entails ethical considerations, but the first steps towards what could become genome editing in embryos have already been taken. Although we are still very much in the early stages and we need a thorough debate before the technique can be used to treat human embryos, CRISPR already has a number of potential therapeutic applications. These would involve extracting cells from an organism, modifying them genetically, and injecting them back into the body to reactivate the immune system or to cause cells to start functioning again when, for various reasons, they have ceased to do so. This approach is very promising and should be the first step when modifying cells within the human body.

How do you think the application of the technique will develop over the short, medium and long term?

It's difficult to make precise predictions, because progress is exponential and the developments of the last few years have been dramatic.  It's possible that within the next five years we will see the standardized application of CRISPR in hospitals based on the cell extraction and modification technique mentioned above. The next breakthrough, perhaps a decade away, would enable treatment within the body, while a challenge for the future is genome editing of embryos. However, as noted above, this is not solely a scientific question but also entails an ethical debate for which we are not yet fully prepared.

Who do you think should lead this ethical debate?

The debate should start with the scientific community, as they have the best understanding of the opportunities the technique offers and the tools available for its application. However, there is a difference between leading and monopolizing. This is a discussion that must involve society as a whole. Although the technical details are complex, the challenge for scientists is how to make this comprehensible. Once this challenge has been overcome, the debate should be opened up, bringing together experts in bioethics, politicians, civil society organizations and so on. It may also be necessary to conduct this debate locally, as it will be very difficult to reach a global consensus.

When should this debate begin?

We don't have a lot of time, because the technique is almost ready to be applied. Without regulation, it is possible that some techniques will be applied before a consensus has been reached. At the same time, we cannot simply discard all the opportunities offered by such techniques, out of fear that they may not be used correctly. So we need to find a balance that allows us to enjoy the benefits while avoiding malpractice, and the only way to do this it through a thorough debate.

What should the starting point be?

We need to start by deciding who we need to involve in this debate, and by identifying what we can do to include those who are not yet ready to participate. It is essential for us to reach agreement on how far we want to go with genome editing techniques, and to prevent their misuse. It is vital that governments be able to establish guidelines and issue regulations with regard to their use. While we are not yet in a position to treat human embryos, we do need to make progress in other areas, where practical application is almost a reality.

As a researcher, what do you think has been the most important contribution of scientific advances in genome editing?

The major achievement of recent decades was the genome revolution. Since the start of this century, we have had a map of the whole human genome. Current research is advancing very rapidly due to the genetic information available in public databases.  This is what underpins the advances we are seeing in techniques such as CRISPR or in the field of personalized medicine.  This has transformed both the scientific and the medical scenario. It is becoming faster and cheaper to read genomes, and we are implementing this in medicine to offer patients the most suitable treatments.

And the negative side of all this progress?

The main threat is the one that has occurred throughout history, whenever there is major scientific progress: the exacerbation of the differences between rich and poor. This was what happened with antibiotics – perhaps the most dramatic scientific achievement in the history of humanity – which led to a significant increase in life expectancy in a very short time. Initially, however, these medicines were not available to the whole population and in many countries people continued to die of infectious diseases. The challenge, with regard to genome editing, is to ensure that this gap, while inevitable, is bridged in the shortest possible time. The solution is not simple, but nor should we refuse to apply a new technology unless it is accessible to everyone. That would not be just, either from an ethical or from a moral perspective. If we have the capacity to apply improvements then we are duty-bound to do so, but we need to avoid a scenario in which ‘post-humans' and traditional humans live side by side; where the inhabitants of some countries are still struggling to overcome diseases which have been eradicated in the developed world.

What role should young people play in this scenario?

I regularly give talks on bioethics, genetics, cancer and ageing to groups of young people aged between 11 and 18. We tend to shield and infantilize people of these ages, but the reality is that they are far more capable of making value judgements and expressing their opinions on these issues than we often assume. It's important to involve them in the debate as early as possible. If we educate young people both to understand problems and to evaluate opportunities, and we teach them to take reasoned decisions that go beyond the opinions to be found in their immediate family or sociocultural environments, humankind will benefit and we will take a step towards a better future.