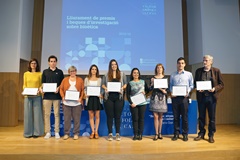 The jury has announced the winners of this year's awards.

Winners of the 2015-2016 Bioethics Prizes and Grants Read More


Rosana Triviño, of the Institute of Philosophy of Spain's Higher Council for Scientific Research (CSIC), for: "Comparative study of protocols for accessing the interruption of pregnancy in the European Union (ProtoAccess)."


Janet Delgado, of the Doctorate and Postgraduate School of the University of La Laguna, for: "Relational approaches: vulnerability and autonomy in bioethics."


The team led by Miquel Domènech of the Department of Social Psychology at the Autonomous University of Barcelona for: "Ethics for robots: Some considerations in the design of social robots for children's hospitals."


The team led by Alejandra Fernández of Parc Sanitari Sant Joan de Déu for "Ethics of care applied to the intensive care unit."


The team led by Francisco José Eiroa of the Department of Clinical Psychology and Psychobiology of the University of Barcelona for: "The status of patients' preferences in the practice of mental health in Catalonia."


First prize to Berta Mateos of Instituto Castelló d'Empúries for 'More than human? The ethical debate around neuro-improvement'.


Second prize to Elena Cortina of Puigcerver, Reus, for 'Paul and the Tree of Memories. Bioethics and death'.


There were a total of 18 submissions for the senior high school prize, and 51 for the research grants.