Supporting the scientists of the future 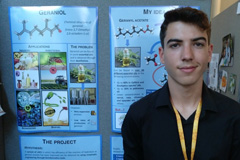 Supporting the scientists of the future

Supporting the scientists of the future Read More

Víctor Torrecillas and David Belda won the prize awarded jointly by Fundació Catalunya-La Pedrera  and the Víctor Grífols i Lucas Foundation for their projects as part of the Barcelona International Youth Science Challenge 2017 BIYSC, a summer school designed to give young students the opportunity to conduct projects at Catalonia's leading research centres.

David Belda from Alicante, who is about to start an undergraduate degree in Chemistry at the University of Valencia, won the prize for his essay: "Is animal immunostaining efficient and ethical?" He began the project at BIYSC during a laboratory internship at the Institute of Research in Biomedicine, Barcelona (IRB) where he worked on fruit flies, and the use of these insect tissue to create antibodies. He enjoyed the experience so much that he decided to pursue the subject further. In his project, Belda reflects on the moral aspects of animal research, in this case involving fruit flies, considers whether such procedures are ethical, and argues that research should explore other options that do not involve exploiting and killing animals.

Víctor Torrecillas, who is about to start his first year at Barcelona Medical School, won his prize for "Mutating LAE5 through bioinformatics tools to obtain a source for high-yield geraniol production", which focuses on research into an enzyme that makes it possible to increase the yield of a geraniol molecule. Torrecillas explains that, "this is a molecule with multiple applications in the food, cosmetic and biofuel industry," hence his interest in researching it.

The BIYSC awards made it possible for Víctor Torrecillas and David Belda to participate in the London International Youth Science Forum (LIYSF), a prestigious programme that brings together students from across the world and is now in its 60th year. The event lasts two weeks, during which participants can attend lectures from leading scientists, visit some of the UK's top laboratories and universities, and meet fellow students from across the globe.

David Belda described his time in London as, "Amazing! It exceeded my expectations and I was really impressed by the quality and stature of the lecturers." The experience has confirmed his passion for research, a bug that he caught while still at school. During his time in London, David made a particular effort to attend talks and lectures relating to chemistry and renewable energy. "I learned a lot about some of the latest issues that I'm particularly interested in," he explained.

Víctor Torrecillas was also enthusiastic about his time in London. "It was a great opportunity to learn a lot both at the scientific level but also by interacting with people from all over the world." Víctor would also like to pursue a career in research. "In addition to working in clinical medicine, I would like to find a specialty that would enable me to conduct research," he explained. He was particularly impressed by the quality of the speakers in London, "who are international leaders in their specialist fields". And he also reaffirmed his commitment to his vocation by attending numerous sessions related to medicine. Of these, he particularly enjoyed a lecture on tropical medicine, with contributions from health professionals with experience of treating diseases such as malaria in Africa.

In addition to the scientific and research content, the two prizewinning students both said they had benefited from the experience of visiting London, and the opportunity to meet and make friends with students from countries as diverse as Australia, the United Arab Emirates and Mexico. "Contact with people of our own age from very different cultures was incredibly enriching," they agreed.